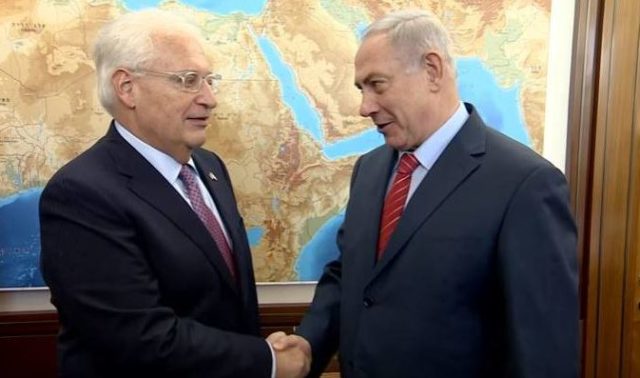 The U.N., the E.U., Russia, China and almost all the countries in the world see the Israeli control of the West Bank, Gaza, East Jerusalem and the Golan Heights since 1967 as “military occupation.” But Israel doesn’t, and now the U.S. might not see it that way either.

editors note: Thank you to the USA for taking this step to start to undo the damage Carter did that contributed to the loss of many Jewish lives. Carter will answer to The God of Abraham, Isaac, and Jacob for what he has and is doing to Israel. Carter has always been anti-Israel, anti-Semitic & always pro-Palestinian and pro-Arab. Countless times he has smeared Israel & hurt its policies & make Israel look in the eyes of the world as an occupying force. Ex-pres. Carter claims to be a Christian, yet doesn’t understand scriptures that distinctly declare what Ishmael’s descendants were to become. I don’t know how anyone could think the so-called Palestinians have any legitimacy in Israel’s land.

In a significant policy change, the State Department ceased using the term “occupied” in references to various regions of Israel, including Judea and Samaria.

In a US State Department annual report on human rights, the controversial term “occupied” was largely eliminated in references to various territories in and adjacent to Israel. While the term “occupied” had been used in such reports since the Carter administration, the 2017 version drops this term, which is generally used derogatorily and defamatorily to criticize Israeli policy following military victories through which the Jewish state acquired control of various territories.

The change comes after US Ambassador to Israel David Friedman advised the department in December to stop using the “misleading” term “occupied” in references to Judea and Samaria.

At the time, Friedman remarked in an interview, “I think the settlements [in Judea and Samaria] are part of Israel,” which “was always the expectation when [UN] Resolution 242 was adopted.” He added, “The 1967 borders were viewed by everybody as not secure. There was always supposed to be some expectation of [Israeli] expansion” into Judea and Samaria.

The term “occupied” is considered by many to be a loaded phrase intended to demonize Israel with regard to its activities in disputed areas. According to policy expert Dan Diker of the Jerusalem Center for Public Affairs (JCPA), “Friedman is advancing Trump administration policy to correct past mistakes and misconceptions of American diplomats. Since the Oslo Accords in 1995, the most densely Palestinian populated areas in the territories are designated as ‘Area A’ and ‘Area B,’ which are under Palestinian autonomy, and are certainly not legally occupied.”

Mark Zell, who heads Republicans in Israel, commented to World Israel News in December that “Ambassador Friedman is fighting back against bureaucratic inertia and State Department Arabists.”

In response to the State Department’s subsequent change in terminology, Israel’s Defense Minister Avigdor Liberman tweeted over the weekend, “The lie of the occupied Palestinian territories begins to be revealed. They say that a lie repeated often enough becomes true, but the truth is forever stronger. The State Department report is proof of that.” source